This abandoned pyramid is located right at one of the most amazing beaches in Playa del Carmen in the Mexican Caribbean. Hidden in plain sight and sheltered by one big holiday resort on either side of it. 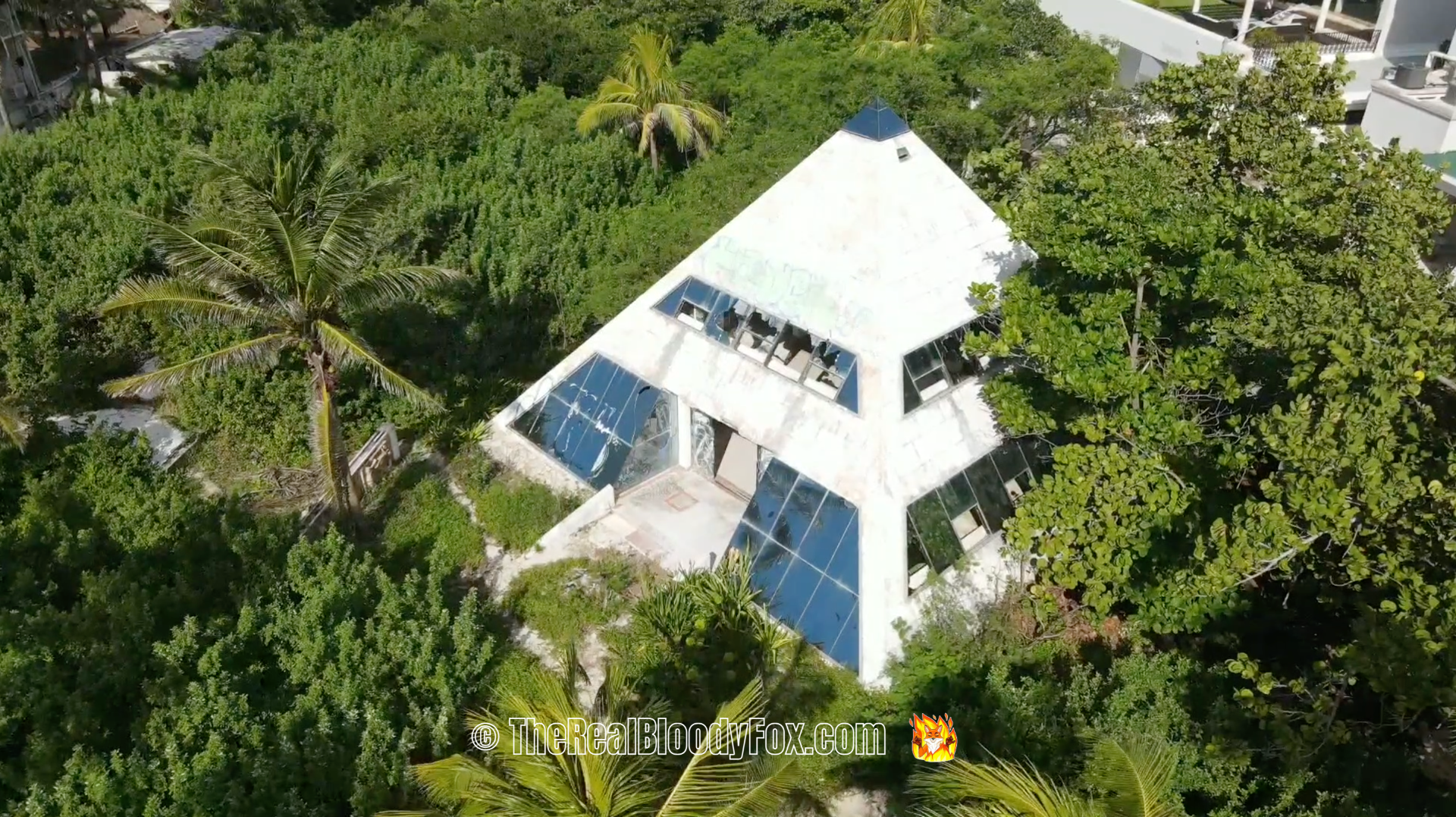 Rumours were that it belonged to a notorious drug lord who was imprisoned and thus left it abandoned. A bit of digging into the memories of the locals however revealed that, in fact, it belonged to a doctor from Merida (3 hours landinwards from here) who used to live in it some time in what must have been the early 90s. It was also rented out to high profile clients for parties by a local beach club - a story I like way better than the drug lord one...

I had to ask several people to get to this info. First one moved to PdC in 2005, second one in 1998 - both said it was already abandoned when they arrived and nobody knew what the heck it was. The third person I asked was a German dude who moved here in 1990 when Playa had a mere 1000 inhabitants as opposed to 300k nowadays and this guy told me what it actually was (at least more or less). He also shared one of his personal memories of a private party he did attend in there some time in the early 90s. He pretty much was a next-door neighbour living in the little house at the far end of the property that is nowadays being used for security.

It honestly is the weirdest thing I've ever seen!

First off, I have lived in places with front yards way worse than that... 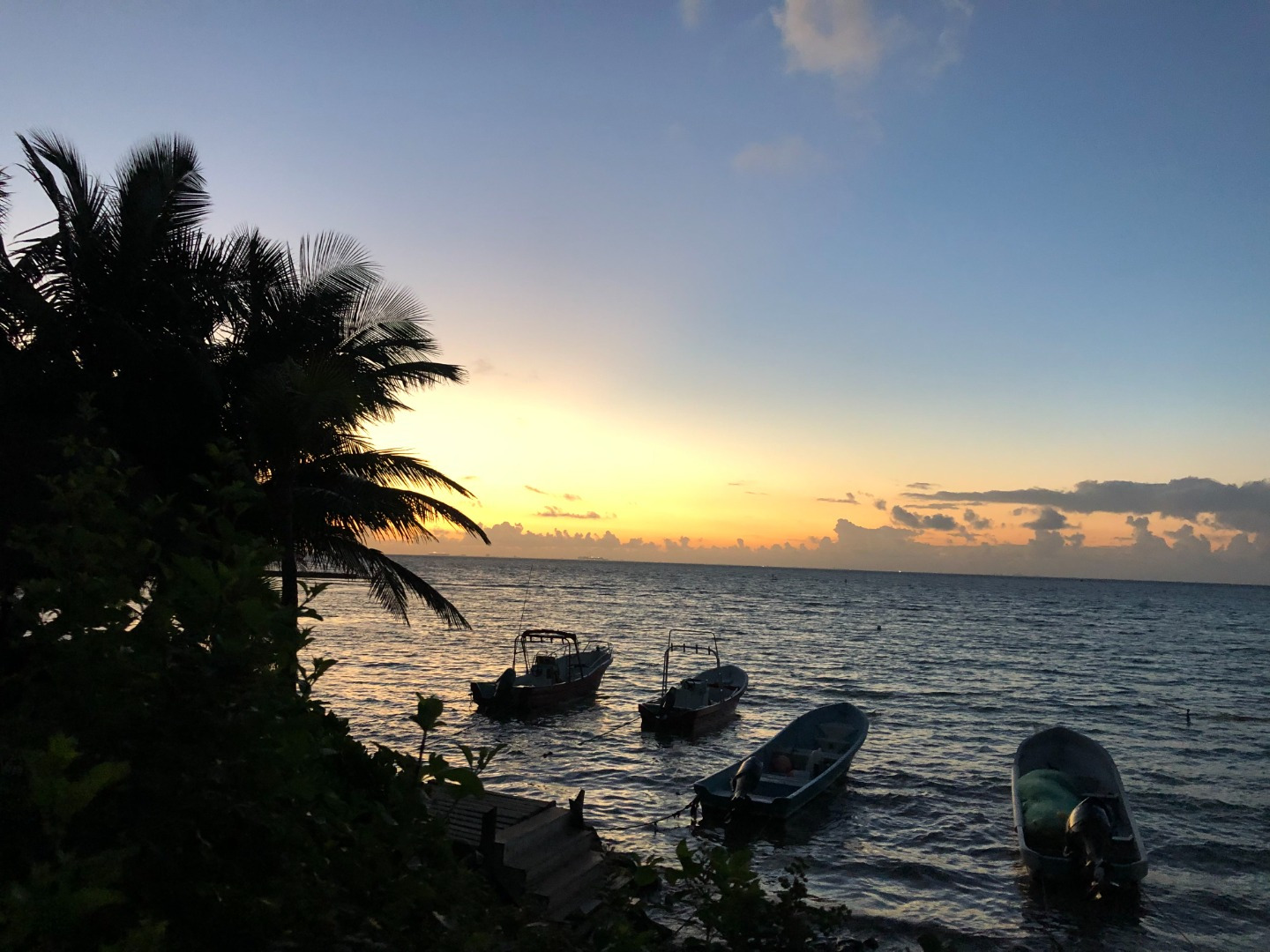 The owner clearly wanted to give it an Egyptian vibe (Duh, Pyramid!!) and, before even getting anywhere close to the front door, I'm being greeted by the eye of Horus and several Egyptian gods on the wall as well as some Mayan stuff on the other side of the outside wall that seemed to have separated the pyramid from another structure from which only the foundation remains. 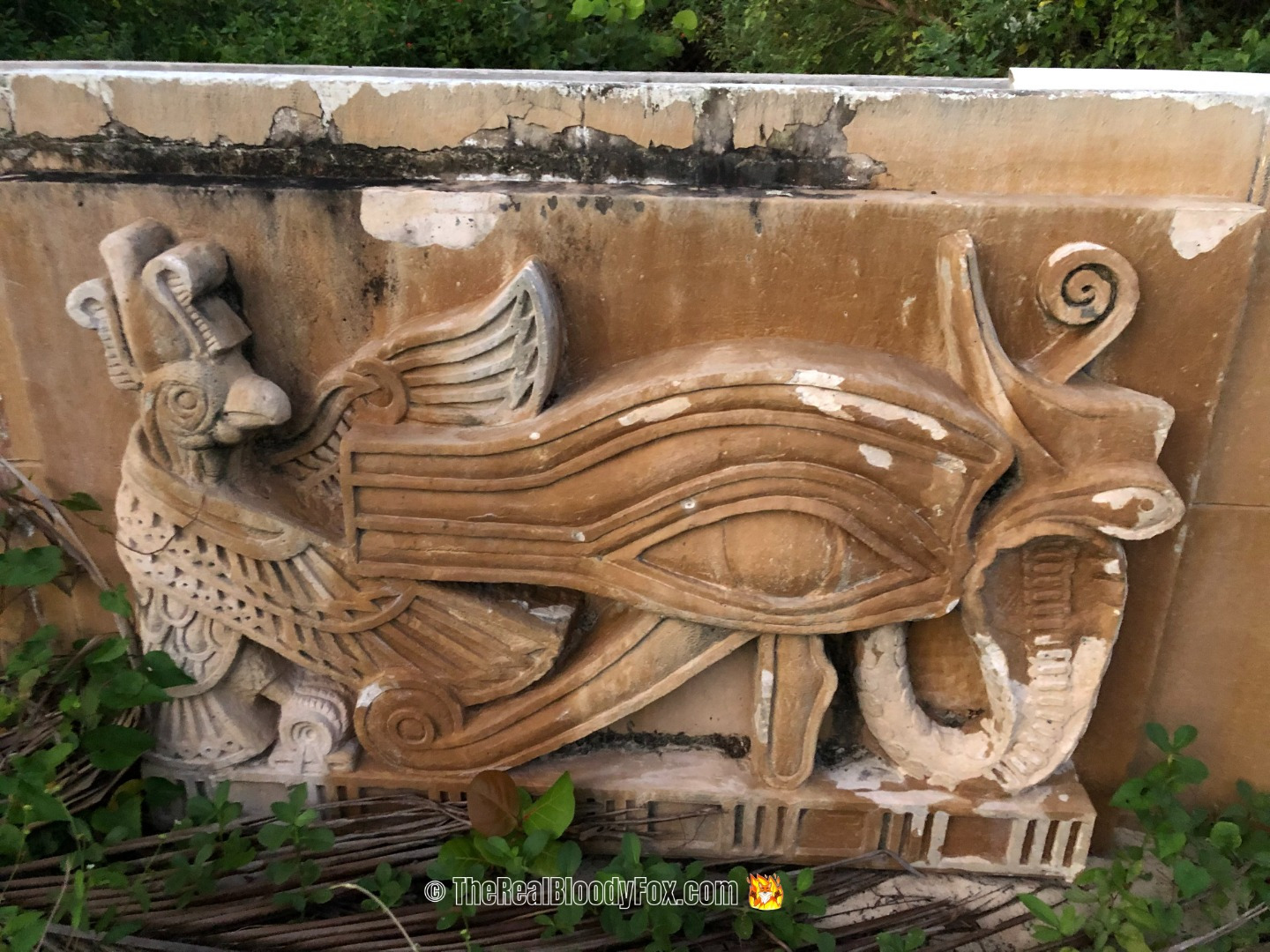 This is what the "Mayan Side" of the wall looks like. 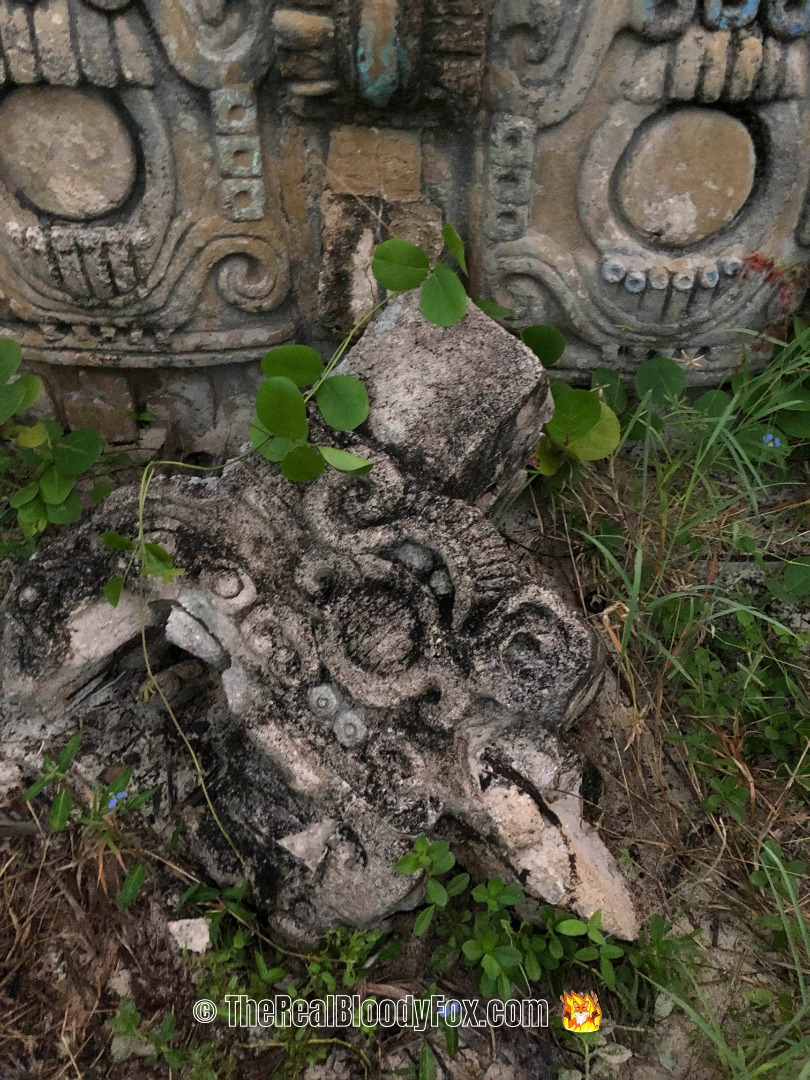 I'm sure the front entrance isn't the only thing that has seen better days... 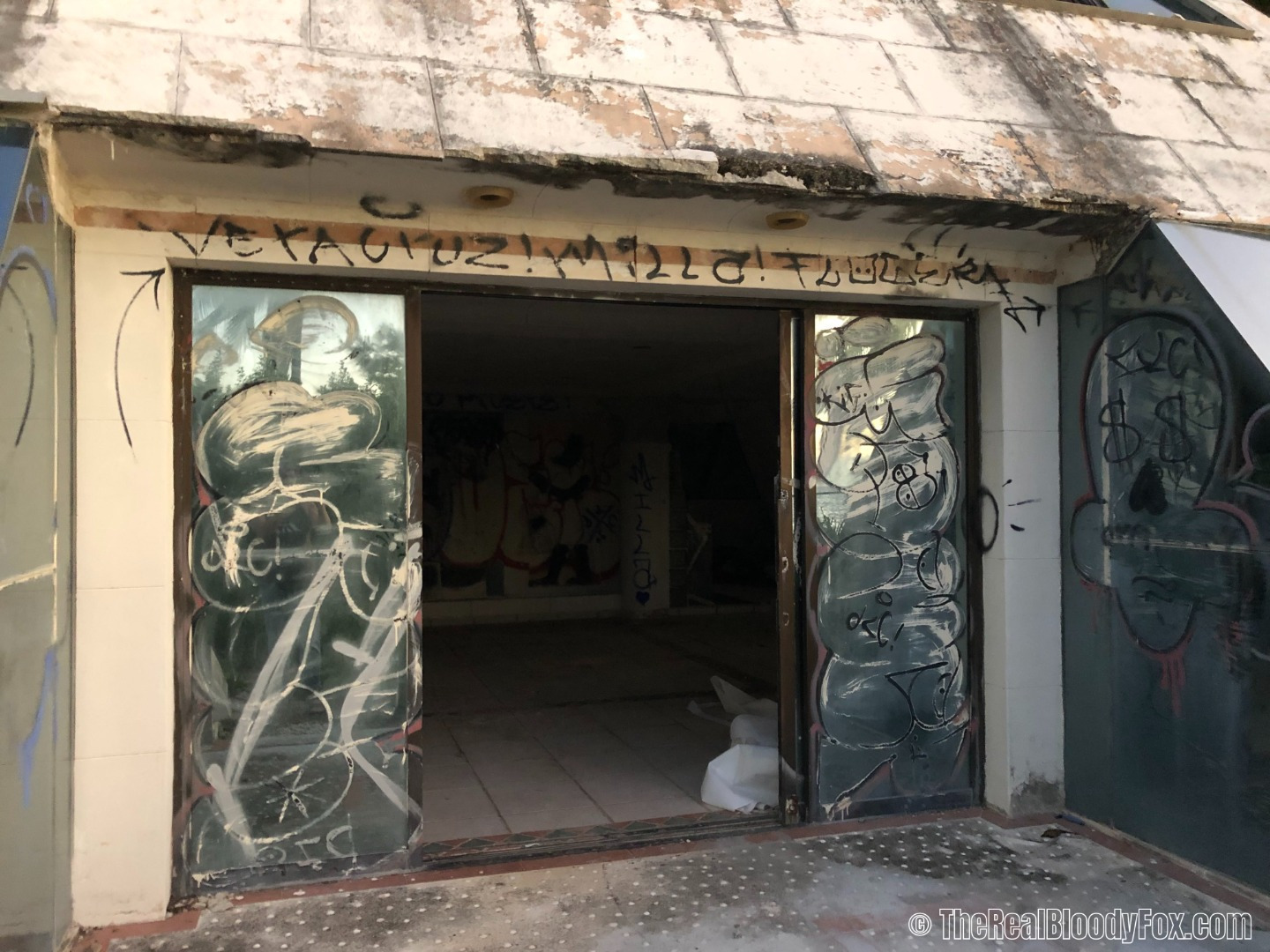 Upon entry I'm simply shocked - unfortunately much of it has already been ruined by vandalism and graffiti. 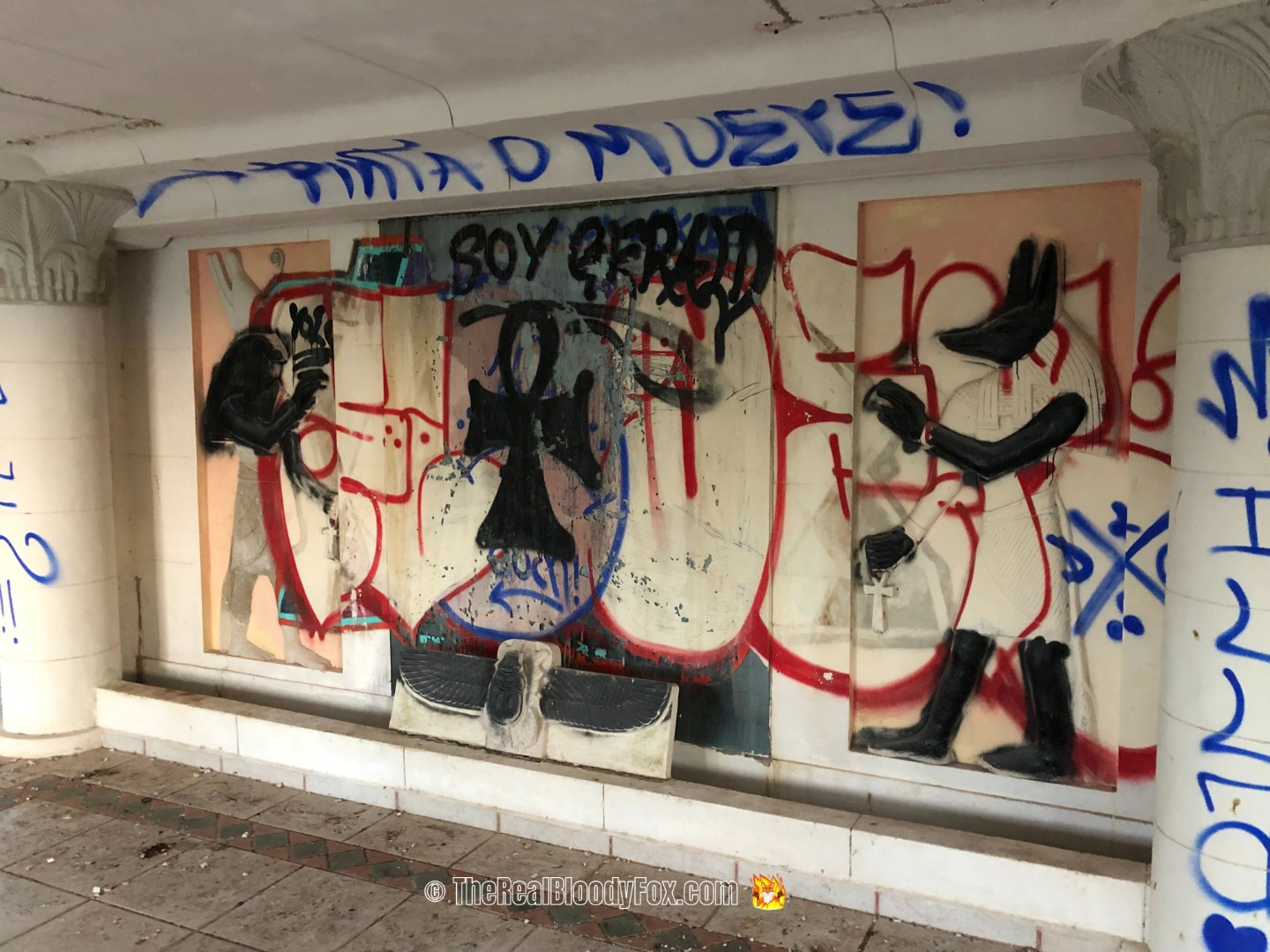 On the ground floor there are plantbeds all around the walls - I might go back and throw a few Carolina Reaper seeds around... 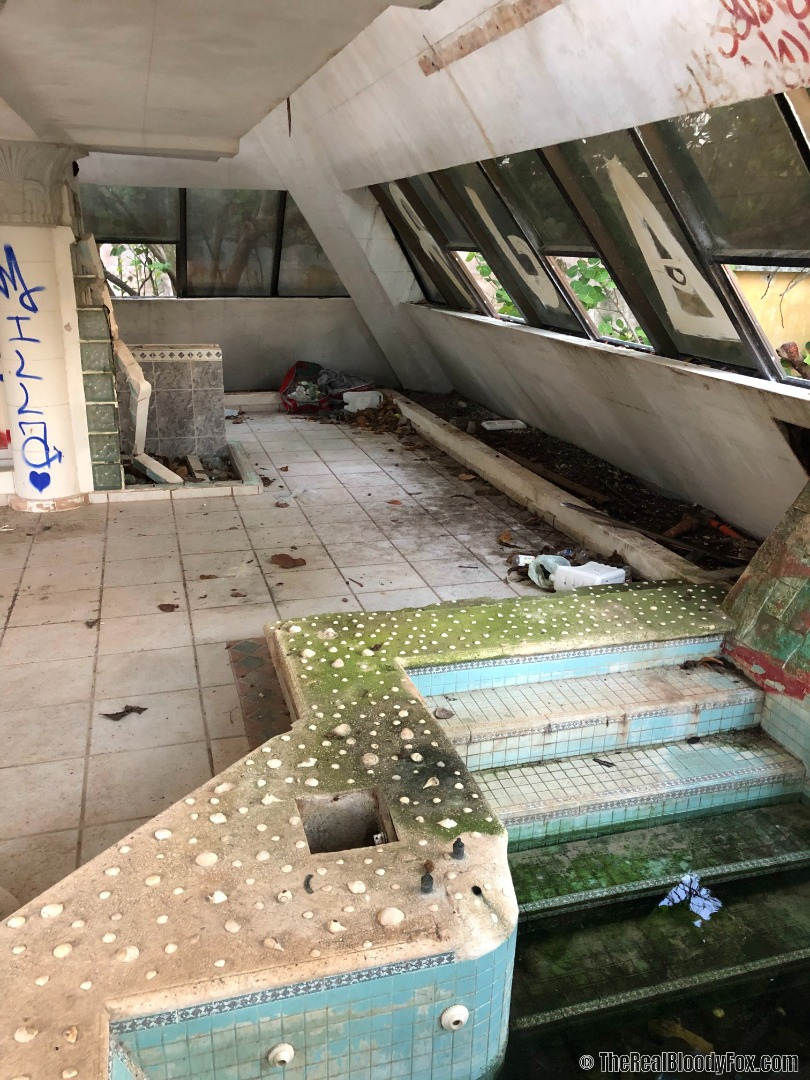 I could absolutely imagine sipping on a [insert cocktail of your choice here] whilst watching the sunset through those strange windows. 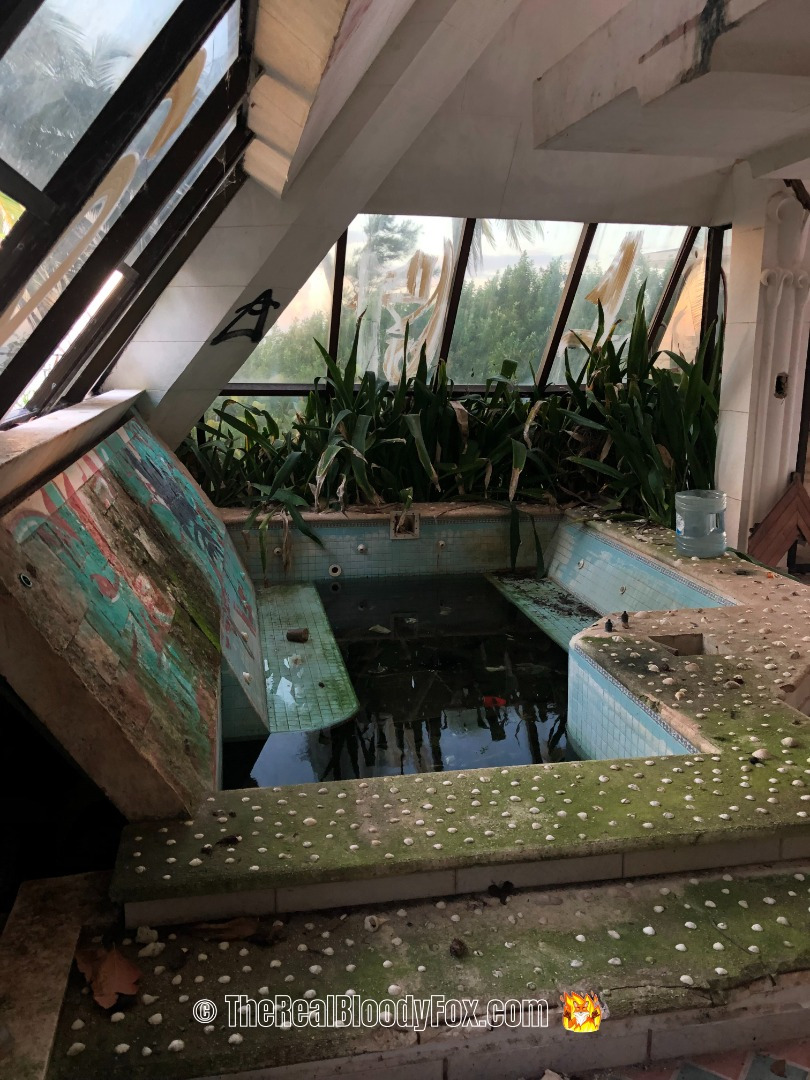 Well, I did watch the sunrise but 6:30 am was a bit too early even for my favourite cocktail! Also, I didn't really bring my swimming gear for a dip in that jacuzzie... 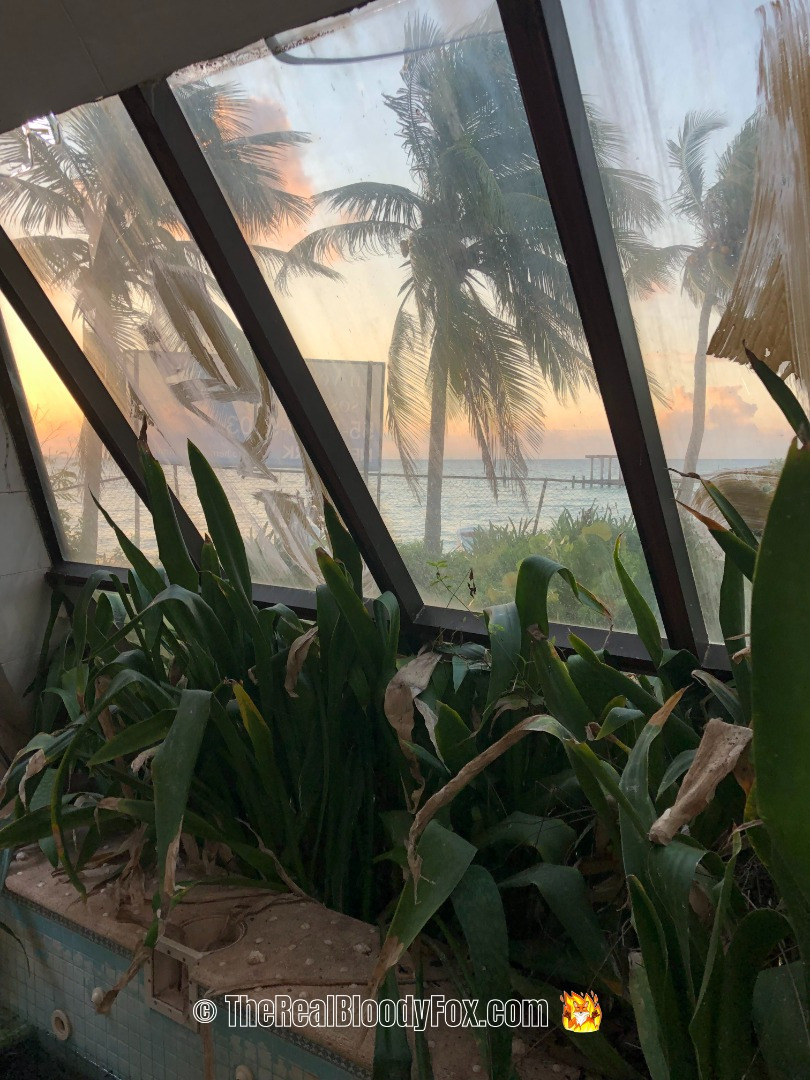 Although there is a good bit of vandalism going on I'm rather happy to put the window damage down to the two hurricanes we had in Playa last winter. 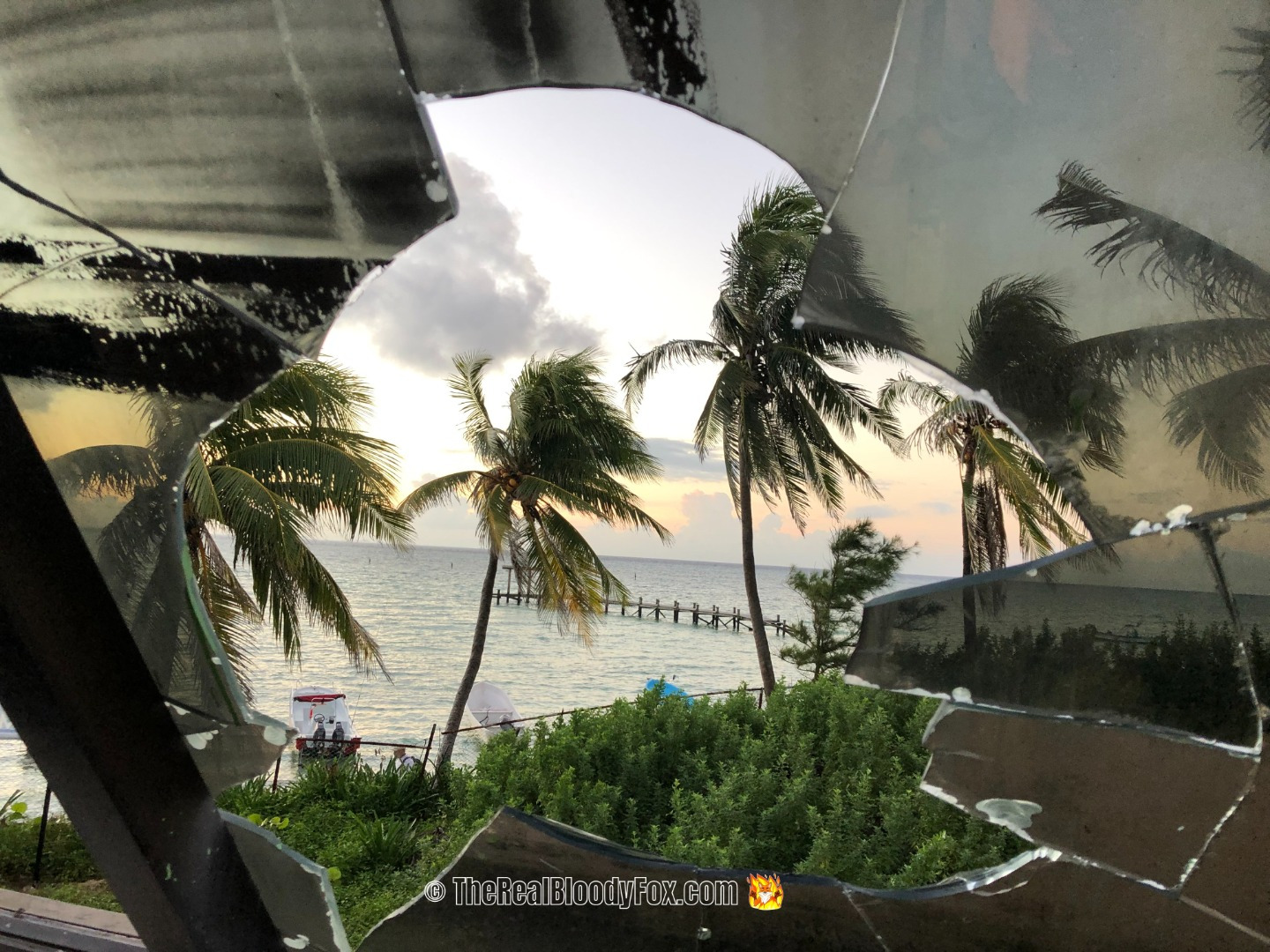 The whole thing is nothing short of MAJESTIC! 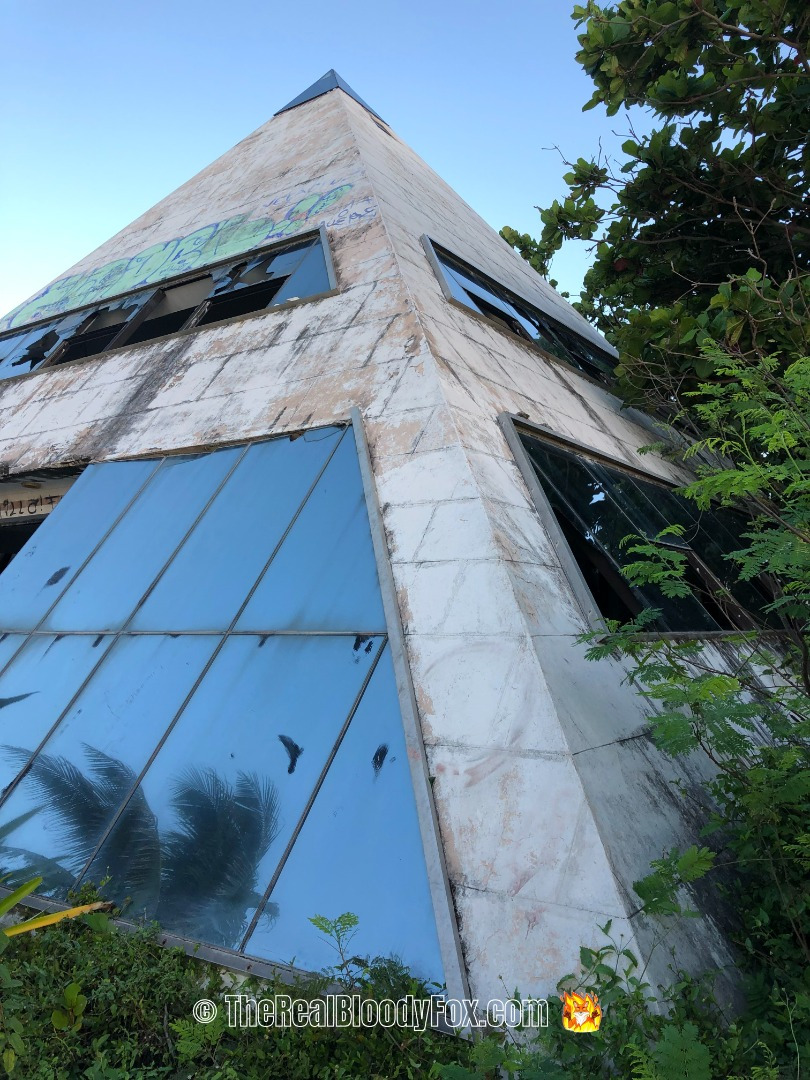 On second thought, someone might have destroyed the upstairs windows just for that very shitty attempt at being an artist. If so, I hope they hurt themselves a slight bit at least. 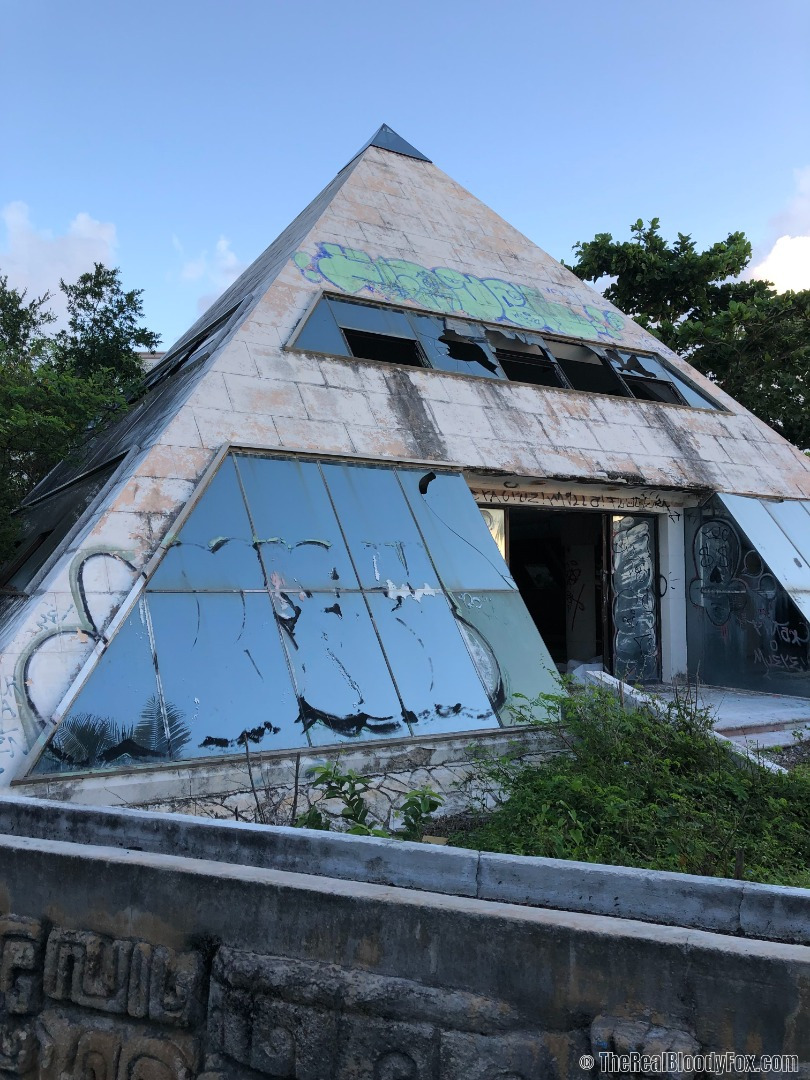 Looking up on the second floor the very top of the pyramid is a skylight. With the costs of electricity in Mexico it's always good to have as many natural light sources as possible. Speaking from experience. 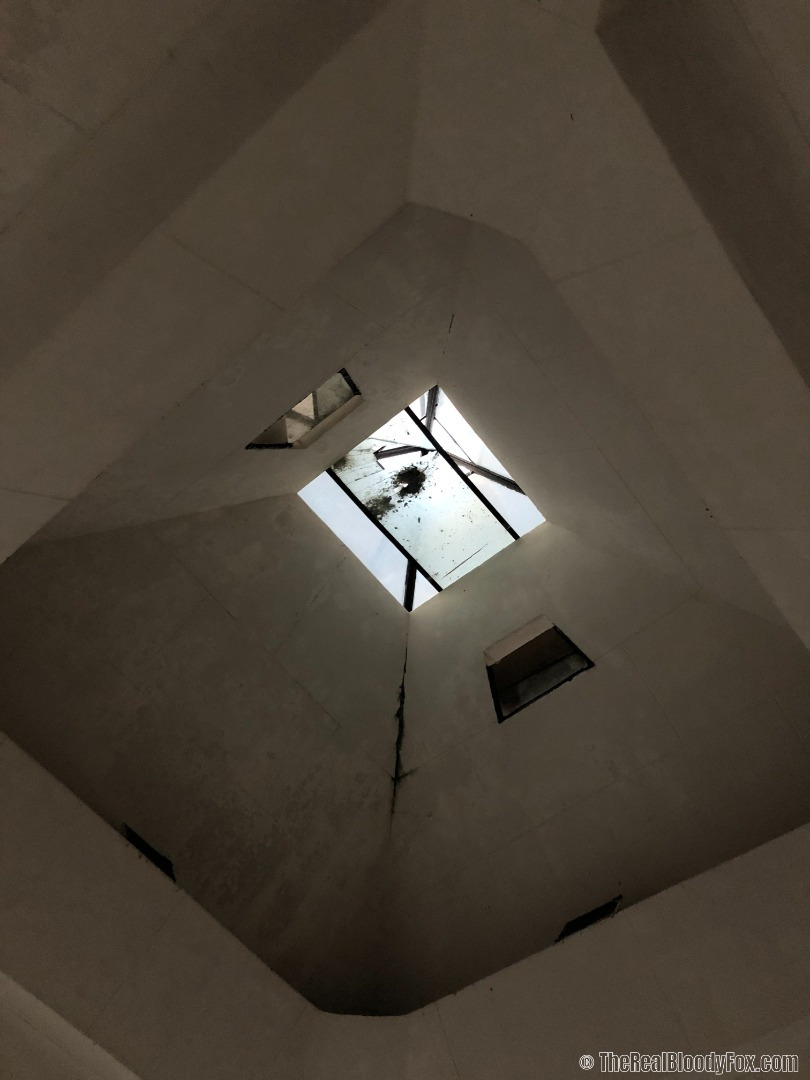 Get any closer to the upstairs toilet and you'll be greeted by an actual Mr. Hanky. So just don't. 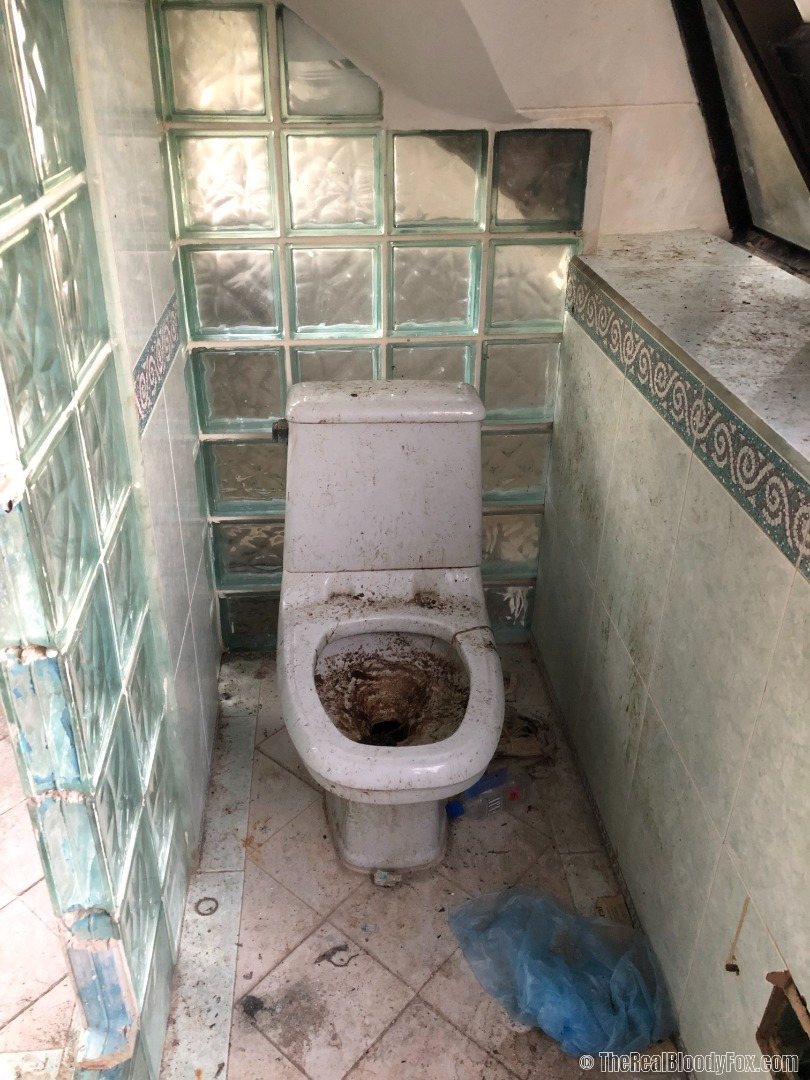 Rather take a look to the right at the completely overgrown backyard. The building to the very left is one of the neighbouring resorts. 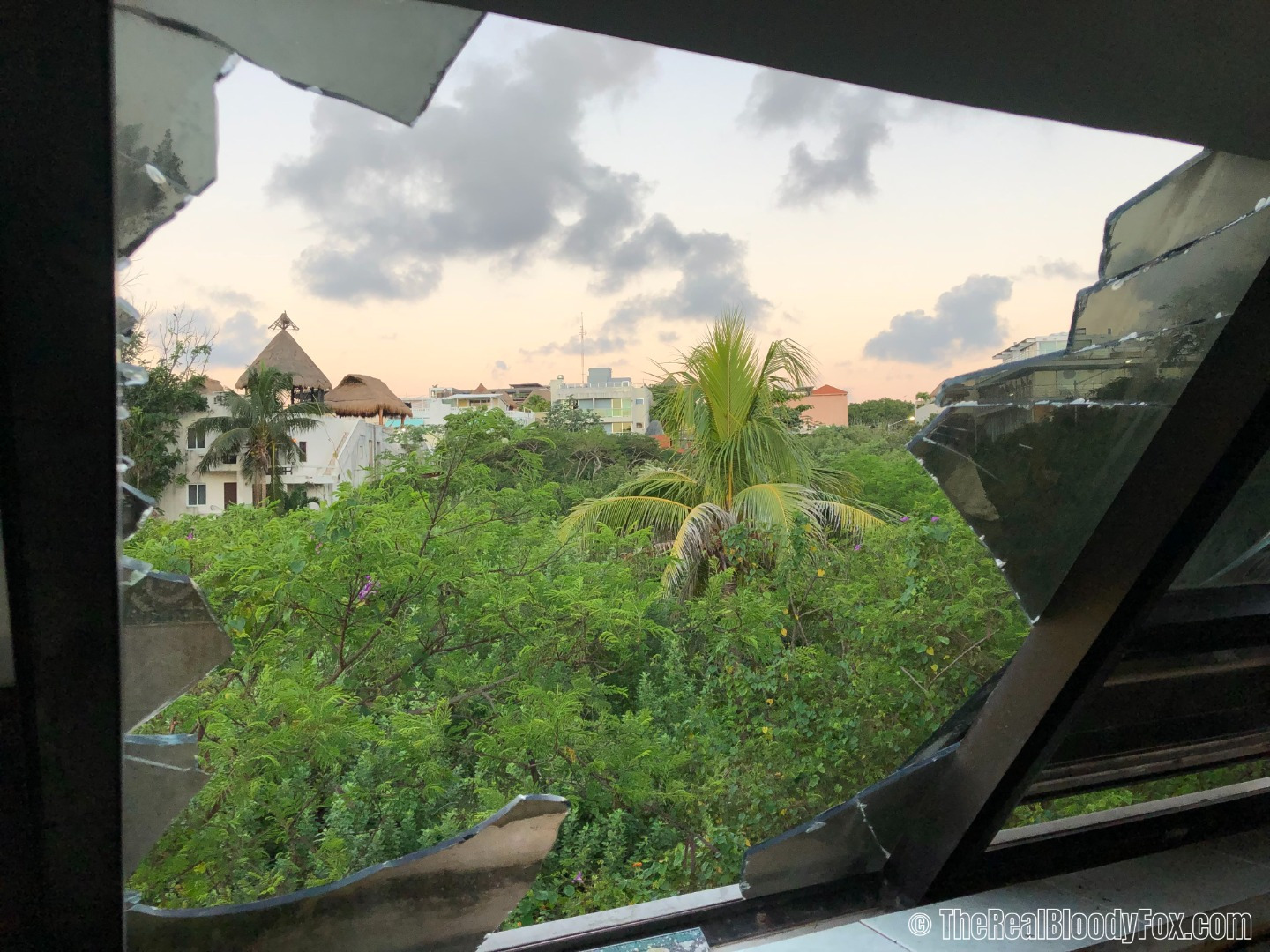 I get the coolbox but no idea why anybody would keep a broom and a dustpan in there, looking at the overall state of the place.

You know what am saying...?

This is the upstairs sink (or what's left of it) and there is one toilet and the remains of one shower on either side of it. We can really only guess how it must have looked when everything was functional. Having three toilets and three showers in such a relatively small space does not really make much sense to me if this was really meant to be a holiday home.

I could imagine some kind of spa, a massage parlour or something on the even lustier side...

Considering the amount of tourists (although decreasing) who come to Playa del Carmen every year I really thought this pyramid would have gotten more attention online but, at least in the English speaking online world, it has not really been talked about for around seven years.

It got a little bit of interest back in 2014 when two reddit users apparently went there within just a few hours of each other - one took pictures and the other one filmed some pretty amazing drone footage that clearly shows how much greenery can grow within just a few years.

Also, the drone footage shows a security guard walking in front and the pictures show way less damage and graffiti seven years ago. 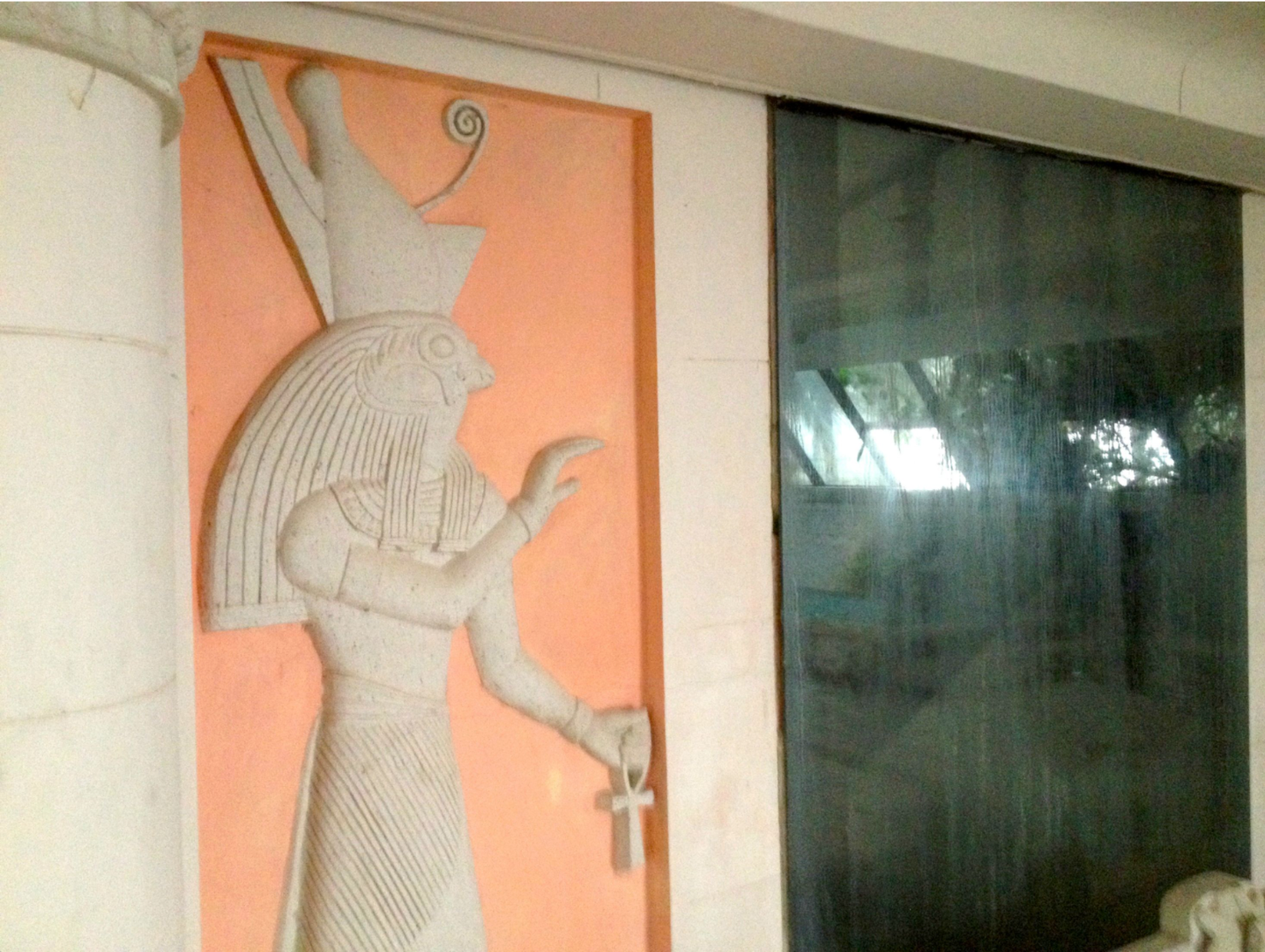 (Source: Photo of Reddit User '700Tnecniv' from 2014 - hosted on Imgur - seemingly the last person to enter this place respectfully for a very long time)

Whoever owns this place should have made sure that the security guard keeps doing his job. The only thing that reminds of it nowadays is this "Security Sign" that appears to be made of an old shirt. 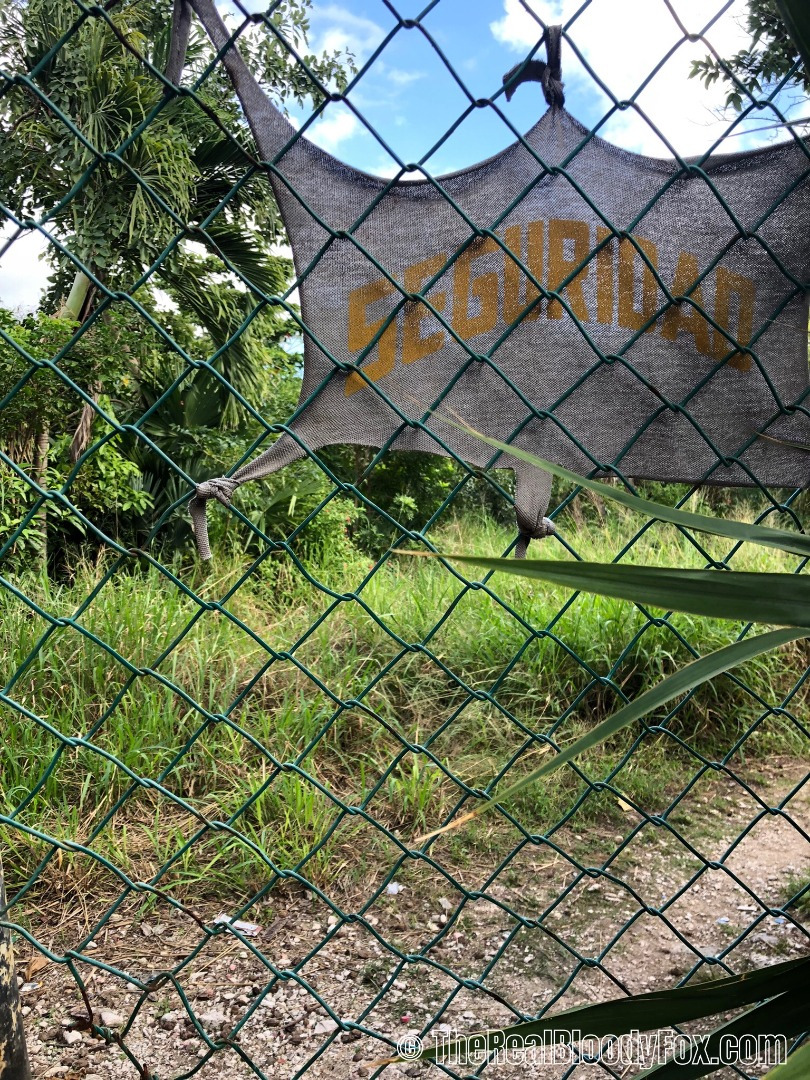 I find it quite astonishing but also saddening to see how much it has changed for the absolute worse in just a few short years.

The whole property is currently for sale for a whopping 22 million US Dollars!

Quite obviously they want to build another whitewashed, soulless resort, like there aren't enough already... Honestly, I don't think it will sell for this amount as tourism has declined in recent years, even pre-virus, and I do hope that someone with a heart will somehow pick it up and make something better out of it and honors the history. I suppose somewhere deep down I believe in miracles and in the good in people. 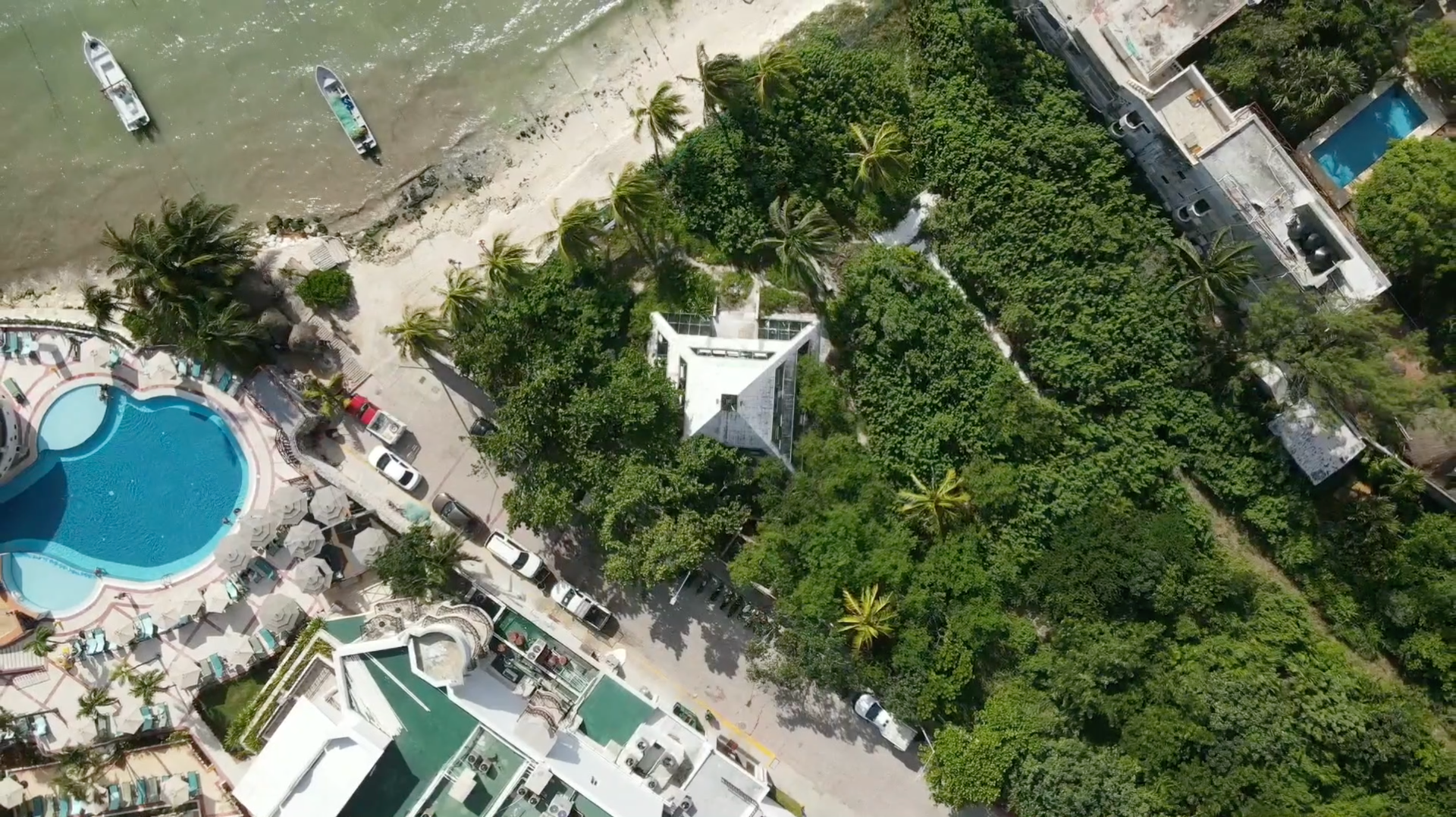 For more details of the upstairs department and the huge tropical garden, my exploration video of the pyramid can be found here: 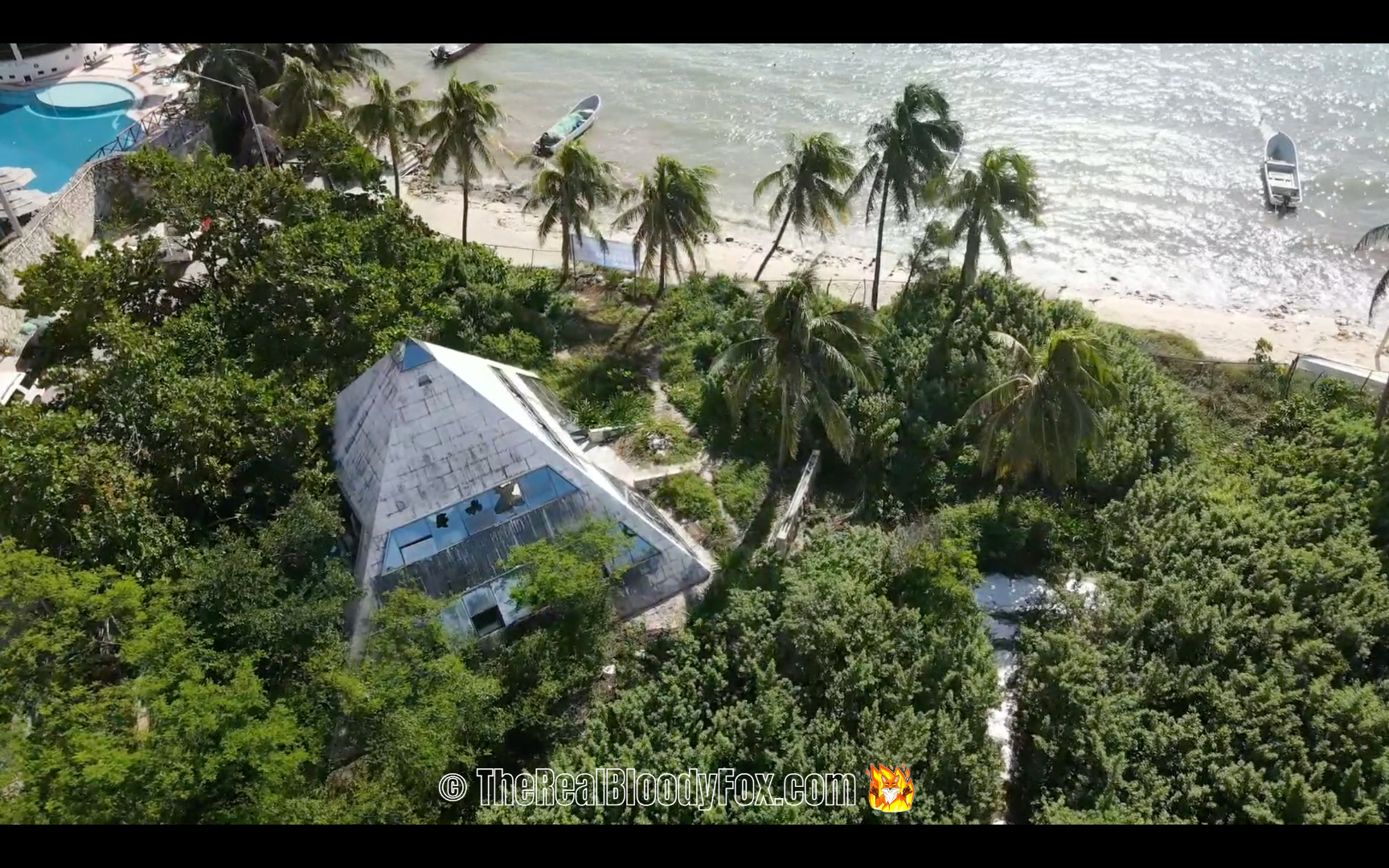